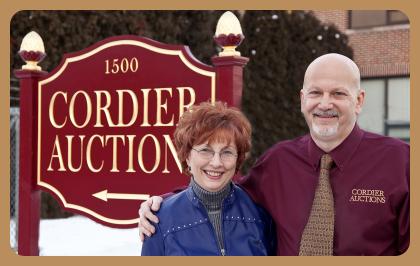 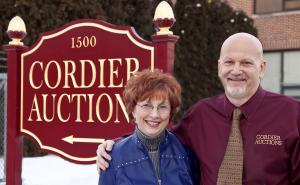 David and Sandra Cordier had been modest collectors when they began their business in 1980, while living in Halifax, Pennsylvania. Initially the Cordiers exhibited at area venues such as Black Angus near Reading, Pennsylvania, and the Eastern National Antiques Show held twice yearly in Harrisburg. In 1988 the Cordiers opened a permanent display at Northgate Antiques Mall in Carlisle and, as they became established, began to exhibit at regional shows such as Atlantic City, New Jersey, Baltimore, Maryland, and New York City. In 1988 the Cordiers moved to Camp Hill, Pennsylvania and opened Cordier Antiques and Fine Art Gallery.

In 1998, as the Internet and its impact on the industry grew, Cordier Antiques expanded into that venue. In 2000, Ellen Miller joined the company to oversee that component of the business in addition to other responsibilities. Realizing the significance of both traditional and online auctions, David Cordier became a licensed auctioneer in 2006 and began establishing Cordier Auctions as the premier auction house in Central Pennsylvania.

The company moved from Camp Hill to its current 12,000 square foot location in Harrisburg, Pennsylvania in November, 2011. The company employs 15 full time staff as well as part time staff and numerous specialist consultants.

Cordier has received many awards including “Best of” from Harrisburg Magazine. They have also received several awards from the Pennsylvania Auctioneers Association including “Best in Show” for the company brochure.

Cordier Auctions & Appraisals has been a proud sponsor of “The Antiques Road Show” on WITF television since 2000.